The Wasatch Boer Classic was hosted by the American Boer Goat Association (ABGA) in Tooele on Oct. 9-11. The breeding goats and their owners from Elmo did very well.

The locals placed well in all classes and brought home many ribbons. Jaxsten, Haiden and Aceden Thayn were joined by Deri and Devlin Thatcher, who all showcased their animals. 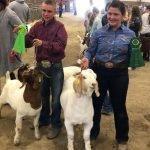 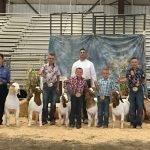