During the Emery County Commission meeting on Tuesday, Emery County Sheriff’s Office Captain Kyle Ekker reported on the Trail Mountain Fire Emergency Watershed Protection Project. After two years of extensive work, the $8 million project is in its final stage. The captain reported that because of a request to the Natural Resources Conservation Service, this has been completed with no cost share dollars but a lot of donations.

It was then time to renew the contract for work at the San Rafael Energy Research Center. An RFP had been posted and only one bid was received from CP Electric. The bid was opened and will be reviewed before a decision is made.

Next, an agreement with Sinbad Desert Amateur Radio Club was discussed; however, the agreement needs to be written up by all the parties before a motion can be made. The document will then be reviewed before signature, meaning this agenda item was tabled.

Approval was given to let PlipCo and the State of Utah intervene and represent Emery County in the litigation filed by Southern Utah Wilderness Alliance and the Western Alliance over roads in the San Rafael Desert Travel Management Plan. The commissioners reported that the sheriff and attorney are working on an ordinance enacting Emery County as a Second Amendment Sanctuary County. This request had come to the commission at an earlier meeting.

Emery County Tourism and Museum Director Adriana Chimaras requested approval to begin charging a minimal fee for entrance into the Museum of the San Rafael. She reported that the museum board felt like this would increase the value of the museum and, eventually, the attendance. The fee schedule would be $2 for those 2-12 years old and $5 for those over 12. Approval was granted by the commissioners.

A contract between Jess Housekeeper and Emery County for services at the San Rafael Research Center was then approved. Commissioner Lynn Sitterud commented that they had looked all over the country for a qualified person to fill this position and they were elated to find one here in Emery County. Housekeeper not only has a degree, but is experienced in nuclear power plant management.

A lease agreement between Emery County and Element One Technologies, Inc. was also approved. This company is doing hydrogen research and has requested to use a bay of the coal combustion area at the research center for at least three months. They will also provide materials and labor to remodel that bay. The rental fee will be $2,500 per month.

In the elected officials’ reports, Commissioner Kent Wilson stated that EMS organization for Green River is moving along with citizens from Green River and western Emery County wanting to join and serve the area. 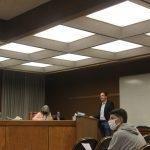 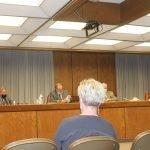 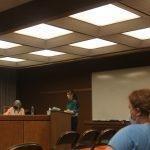