When Carbon Recreation began its yearly task of preparing the county softball complex for the summer season, personnel could not help but notice a large nest that was being built in one of the light towers on the southeast field.

As a whole, the recreation department made the decision to relocate the nest as they did not want it to be damaged from the heat of the light or have debris fall on passersby. From there, the first call was directed to Scott Gibson of the Department of Natural Resources (DNR). Gibson was able to positively identify the birds as osprey that had set up their nest conveniently close to the fish pond that they were feeding from.

Due to the nature of the birds, it was determined that moving the nest was safe as long as their were no eggs or baby birds. Carbon County Commissioner Tony Martines and his son Carson then joined the crew with a drone to fly over the nest.

The Martines’ were able to record footage that showed everyone that, at the time, there were no eggs or chicks that were inhabiting the nest. Once that information was obtained, it was passed to the DNR, who began to plan with Carbon Recreation on the safest way to relocate the nest. Another issue was finding a way to ensure that the birds would not simply rebuild in the same location.

TJ Cook, also with the DNR, joined the discussion and proposed possible solutions for placing a pole and box near the fish pond, which would be an attractive location for the osprey to relocate.

At this point, Carbon Rec reached out to Price City Fire Chief Paul Bedont to request assistance in the form of a fire engine to remove the nest. Chief Bedont happily joined the project, contacting Rocky Mountain Power to see if there was an interest in helping out.

Soon after, the DNR, Rocky Mountain Power, Bedont and the entire fairgrounds staff were on site and had chosen a new location. By the end of the week, with the combined effort of the aforementioned, the pole was erected and the osprey began rebuilding the nest in the bird box.

“We are so thankful for the help of all the agencies in providing a safe and attractive alternative for these osprey and in such a timely manner,” said Carbon Recreation Assistant Director Scott Merrell. “We look forward to the osprey enjoying their new home and hopefully nesting soon so we will be able to see their offspring hatch and explore the area. We hope it is a fun attraction for all our locals and for bird watchers around the region.” 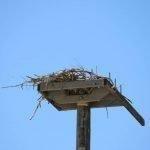 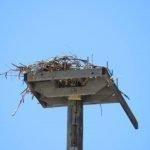