Nearly 65 students signed in at the library to compete in the spelling bee. During the second round, the field was almost cut in half but many remaining rounds were needed to determine class level champions.

Joey Leonard will represent the seventh grade at the district bee on Feb. 6. He was also the overall school champion. Mason Stilson earned runner-up in the seventh grade. The sixth grade winner was Bryndli Stevens with Koy Gale as her alternate. In the eighth grade, Garrett Lee captured the honors with Zander Hughes as the runner-up.

Members of the faculty and staff from the San Rafael Middle School conducted the spelling bee. 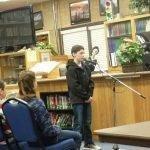