Merlen’s third win of the season moved him into the 19th position in IMCA National points. He ranks fourth in the Big Daddy Race Cars Southern region, and third in Utah state points.

“It felt really good to get another win and to see my hard work paying off,” Merlen said. “I am having a great time racing at the different tracks in the IMCA Hobby Stocks.”

Merlen, from Helper, Utah, has been racing for 15 years and has raced in several classes. His father was also a racer and Merlen said his family has been into racing his entire life.

Not only did Merlen grow up within the racing community, it’s also where he met his wife, Linda, when they were both 13 years old. They reunited in 2009 and married in 2013.

“Linda has always liked racing and is having a lot of fun being a racer too,” he said. Linda races in the IMCA Sunoco Hobby Stock class alongside her husband. “Our favorite night was the night we both won our main events in different classes.”

“The Merlens are two of the most helpful people I know,” said IMCA Hobby Stock competitor Jason Duggins. “Mark is always willing to lend you not only a car, but a helping hand. He is one of the hardest, smoothest drivers out there. I love racing with him because he keeps me on my toes.”

Linda also has a stellar reputation among her competitors.

“Linda, as a driver, is very under control and drives within her limits and she doesn’t over drive her car,” Duggins said. “On a personal level, she’s kind of the mom to us guys because she keeps us fed and she’s always willing to help out at the tracks we race at. Together, they make a great team and I love racing with them both.”

The pair played an important role in the operation of Wild Bill’s Raceway in Ephraim, Utah. Merlen and his brothers worked for Bill and Debbie Rowley, the track owners, for 15 years. Linda Merlen and her family joined the crew six years later. The track’s final races were held on July 8 and 9.

The dynamic racing duo spends their summers working on their cars, racing and traveling to different tracks.

“Racing is pretty much what we love to do and takes up most of our summers,” he said. “We also like spending time with our families and racing family and friends. I feel we are all there supporting the tracks, and all the racers are doing their best to keep our passion going.” 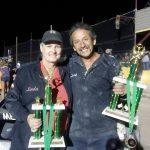 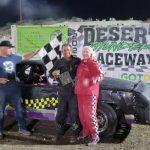