Carbon High’s Garrett Marsing and Kayleigh Potts had outstanding performances at the 3A state track meet at BYU in Provo today despite battling pouring rain and winds.

Potts took fifth in the high jump as she made her final leaps as the skies opened up and the rains began to fall. She cleared 5’3″, just missing the school record of 5’5″. Potts is a senior this year.

Junior Garrett Marsing had the run of his life finishing 3rd in the 800 meter run. He posted a 1:57 and set a new school record. He lost  to a pair of athletes who are nationally ranked. They are both seniors this year.

Coach Jimmy Jewkes was pleased with the efforts of Marsing and Potts as well as the entire team he coached this year. 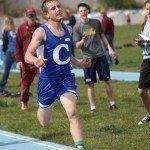 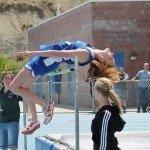 Kayleigh Potts clears the bar easily at the region meet in Price. Potts took fifth at the state meet