With the completion date less than a year away, crews are pushing to meet the schedule on the rehabilitation of Millsite Dam.

It is a “catch-22” situation at the job site right now according to project leaders. Snow hampers the construction now, but will be much needed to fill the reservoir next summer so that the finishing touches can be accomplished. Concrete crews from Wall Contractors are working on the outlet tunnels and gate house. These will house the valves for the release of water from the reservoir.

Once the outlet tunnels and gate house are completed, the “dirt” (sand and gravel) will be placed on the downstream  side of the dam on a slope from the end of the outlet tunnels to the top of the dam. The materials for this are being crushed on sight, as well as at Nielson Construction’s Ferron crush site, which sits just over the hill from the dam. Many thousand yards of dirt will be needed for completion of the project.

The remaining rock is being removed from the spillway area and drainage trenches are being dug so that concrete work can begin next week. This has been the slowest process, as the rock is much more dense than anticipated and had to be drilled and expanded in order to remove it from that area. At the present time, the riff-raff rock from the south end of the dam is also being removed.

The foundation earth-fill work, though nearly complete, had to be suspended for the winter. Wall Contractors is expecting to increase the number of workers in order to offset the word load, which is three weeks behind schedule. At the present time, Wall Contractors has between 10 and 15 employees and Nielson Construction has approximately 20 employees working on the project, providing 30+ jobs for local individuals. This does not include management personnel.

Inspectors from various government agencies, such as the National Resources Conservation Service and the Utah State Water Board, report quality work. Ferron Canal and Reservoir company are also pleased with the project construction. 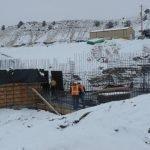 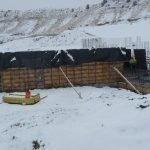 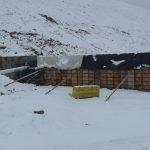 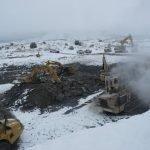 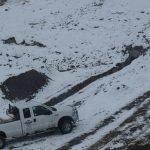 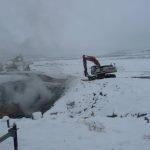