Sherrie Gordon, Price City Recorder, was recognized during the regularly-scheduled city council meeting on Wednesday evening when she was presented the International Institute of Municipal Clerks’ Master Municipal Clerk designation.

Colleen Mulvey, President of the Utah Municipal Clerks’ Association, was in attendance with two other members of the board to present this designation to Gordon. She began by thanking the council for the moment to honor Gordon with the prestigious award. Gordon worked very hard to learn all that she needs to know and Mulvey said she absolutely deserves it.

Mulvey then commended the city for providing the funds and allowing Gordon to have the time to attend these educational sessions. Through her efforts, Gordon is the go-to person in terms of elections, notices, records management and much more at Price City.

Gordon has spent about 120 hours of classroom time to learn her duties. Upon being presented with her designation, Gordon thanked Price City Mayor Mike Kourianos and the council for the opportunity to work toward the certification and thanked the association board of directors for traveling to present the award.

Gordon also recognized the association for its support and guidance through the six-year process. She concluded by commending Nick Tatton, Price City Community Director, for his ongoing assistance. 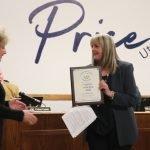 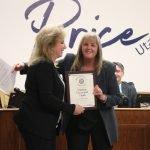 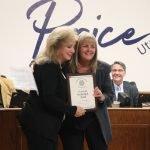 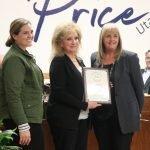 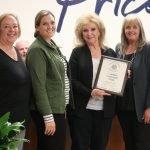