Helper City Mayor Ed Chavez and council member Harwood were sworn into office on Tuesday afternoon at Helper City Hall. Chavez has been serving the term as mayor as a replacement for former mayor Dean Armstrong since March of last year and was voted into office for another term. Harwood is also returning to his council seat to serve Helper City.

Council member Pugliese is currently out of town for training and will be sworn into office when he returns later this month. 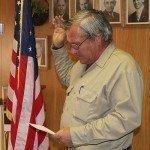