Neldon Huff, commander of American Legion Post 3, as well as six of his comrades attended the Price City Council meeting that took place on Wednesday evening. Their attendance was noted by Price City Mayor Joe Piccolo, who informed the group that he was personally proud to have the legion there.

Huff informed the council that the visit was to show the legion’s gratitude and appreciation for Mayor Piccolo’s position and support. The legion generated a certificate of appreciation that was then presented to the mayor.

Also present at the meeting was Morgan Jensen, president of the Carbon Rodeo Club. Jensen spoke with the council members about possibly sponsoring the rodeo again this year. The rodeo is slated to take place on April 7 at the Carbon County Fairgrounds. Jensen informed the council members that the event usually brings in about 400 plus members, all of whom eat in local restaurants and shop at local businesses.

It is an event that is generally great for the local economy. Jensen further went on to state that the club always appreciates the sponsorship. The council members were glad to approve a $500 sponsorship.

The 2016 fiscal audit report was also presented to the council members by a representative of Smuin, Rich and Marsing. 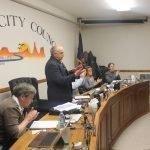 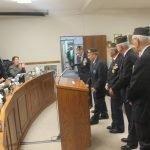