Following a welcome to the student body by Principal John Hughes, the microphone was turned over to Orangeville’s Mayor Roger Swenson for a special Mayor’s Award assembly. Mayor Swenson informed the students that the nominations made by their faculty were not just for exceptional grades, outstanding citizenship or kindness, but for students who exhibited all these character traits.

He told the students the best thing they could do for the city of Orangeville is be the best they can be at Cottonwood Elementary. Mayor Swenson also explained to everyone that councilwoman Janet Tuttle, who is also a teacher at Cottonwood Elementary, had chosen to recuse herself from nominating or voting for the winners. The Orangeville City Council took the nominations made by the school faculty and decided on a winner. 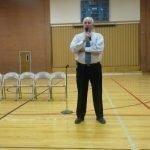 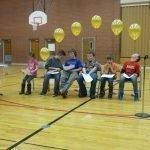