Watkins is a candidate for District 69, a seat that she previously ran for in 2014, but did not win. She served in the Utah House of Representatives for District 69 from 2009 to 2013. After the 2012 general election, Watkins left the Democratic party and joined the Republican party.

King has been a representative for the past 14 years and states that he plans to continue to do things the same way he has been. He also stated that he is especially proud of the work he has been able to complete, with assistance, on Highway 6. King reflected on the strong relationships that he has established with legislators on both sides.

The other area King is interested in is helping to make the government transparent. He will continue to work very hard for traditional energy, he explained, as in the past.

After the introductions, a question and answer segment took place. KOAL listeners were urged to submit questions for the candidates and many rose to the occasion. Each representative took turns answering questions first and were given two minutes to answer each.

One apparent issue that has many community members concerned was the mining industry and what will become of it. Watkins spoke of a tour that she took some time ago of the plants in Castle Dale and Huntington. She reflected on being impressed that the mines were only intended to run for around 35 years but had been in production for much longer.

Representative King recently spent two days at an energy summit, which focused on oil, gas and coal. At the summit, King learned of new technologies that are becoming available that will assist in ridding emissions from coal fired plants. He also assured the listeners that the last two plants in our area are very secure. They have contracts that will see them running for the near future. According to King, another piece of legislation was passed for Rocky Mountain Power, and as a part of the legislation, they will give $1,000,000 per year toward research on clean coal technologies.

Watkins also took time to answer another submitted question on what, as a state representative, can be done by them personally to bring jobs to the area. Watkins believes that more educational opportunities need to be created. She also spoke of how work needs to be completed with other leaders to facilitate bringing other businesses to the area.

“It takes someone tough to say, ‘hey, we’re down here; help us help ourselves,’” stated Watkins.

Another question presented to the candidates urged them to inform the public on whether or not it mattered who holds the office when only 35% of what we know is controlled by Utah officials. King answered by stating that it depends on whether you care about that 35%. To King, to make that 35% a place we all love to work and raise our kids in is very important.

Watkins answered in the same fashion, stating that what we have control over, we need to keep in our control. She believes that this is our state and we need to pay attention to what is going on in order to work hard on making sure it is what we want.

When prompted to speak on the problem with addiction, King stated that he will never tire of working to better the issue. One of the main things he praised was the availability of the lifesaving drug Naloxone. Watkins also spoke that throwing addicts in jail and hoping it cures them will not work. She also stated that focusing on ensuring that these substances aren’t as accessible as they have been.

Having both been in the position previously, one listener begged the question of why the candidates would want to put themselves in this position once more.

“The question indicates that there’s a downside to what we do and I disagree with that,” King stated.

The full interview with Representative Brad King and former Representative Christine Watkins will air on ETV Channel 10 in the near future. The Emery County Commission candidates will appear on a Meet the Candidates segment of KOAL Radio next Tuesday. 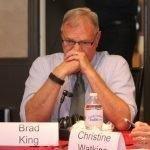 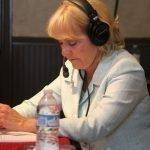 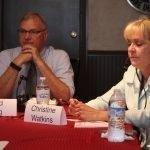 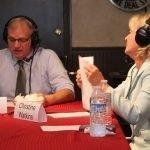 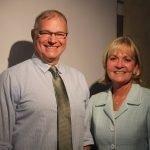