Danny Van Wagoner and Lynn Sitterud made the trip to Carbon County Tuesday evening to participate in this week’s “Meet the Candidates” event hosted by Castle Country Radio KOAL AM750/FM 103.9.

Moderator Andy Urbanik allowed each candidate, vying for the open seat on the Emery County Commission, two minutes apiece as the trio spent a two-hour block discussing a variety of topics sent in from the public as well as helping the community understand more about them.

Van Wagoner currently serves as Castle Dale’s Mayor while Sitterud has helped many in the county through his self-ran business. Both men, having spent significant time in Emery County, expressed their love and admiration for their home and their desire to make it the best place possible.

One of the hot topics Tuesday evening was that of tourism. Against the backdrop of a recent visit from consultant Roger Brooks in May, many questions touched on the subject dealing with the role the candidates saw it playing as well as asking them to name businesses in the county open on Sundays past seven in the evening as well as other criteria.

“I’m not sure if every body in Emery County wants to see a large turn towards tourism,” Sitterud said, keeping the economics of places such as Park City and Moab in mind. “I think that we do need to build our tourism up above what it is right now, we need to make our county inviting to people that come in and visit us,” he continued, expressing the need to cater to visiting tourists by providing services such as hotels and restaurants.

“I believe tourism is going to be a vital part of our rebuilding of Emery County,” Van Wagoner countered, stating his views on the subject and calling for more advertising of the county as well as the building of needed infrastructure to accommodate visitors, including hotels and restaurants.

“Sometimes you might just have to re-tool,” Van Wagoner said as he also offered the example of The Forbidden Fruit, a well-known establishment in Elmo which has, in recent years, expanded their line of products to include other sweets besides their well-known caramel and chocolate apples.

As a closing statement, each hopeful was asked to give a reason why they should be elected. Sitterud offered his experience in business as well as his ecclesiastical service and his knowledge of Emery County as defining traits that he hopes to bring to the office of commissioner. He continued with a personal example of his daughter who had recently left the county and his desire to keep the rising generation in the area.

Van Wagoner brought forth his experience as Mayor as a characteristic that would help him in office. The candidate also expressed his desire and plan to be transparent as possible if elected as well as a fair voice throughout all of the county.

“We’re not dead,” Van Wagoner said, “but let’s get on a a rocket ship and let’s move forward.” 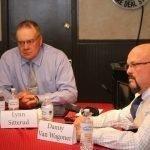 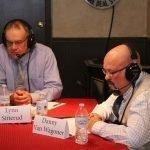 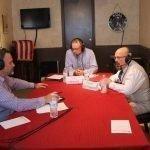 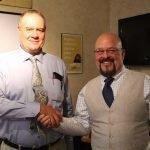