Ryter Ekker, a student at Canyon View Middle School, competed for the Utah team in the .22 light rifle competition at the Junior High World Finals in Huron, South Dakota.

Ekker competed against 108 shooters from 50 different states, various Canadian provinces, Australia and Mexico. In the first round Ekker, finished ninth, qualifying him to compete again in the short go. The short go consisted of the top 20 competitors from the first round. Ekker finished ninth in the world with an aggregate score of 574.

This was Ekker’s first year competing with the junior high rodeo club. He has really enjoyed competing and getting to know the other competitors.

Cole Magnuson also represented the Utah team and finished ninth in bull riding in the first round, but was bucked off at about 5.9 seconds in the second round, not making it to the final short go. 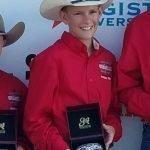