The first Carbon County Commission meeting of the month took place on Wednesday. At the meeting, a number of different items were discussed and several gifts and awards were granted.

Dennis Ardohain spoke a few words on the Miner’s Memorial that was dedicated recently on Price’s Main Street. He also took the time to give a few items to commissioners for their help with the memorial. He presented first a painting that had been done on a rock that featured a miner standing in front of the American flag. Ardohain then gave commissioners a plaque that had an official citation honoring the mine workers. Lastly, he presented them with a decorative light that was created specifically for commissioners. There are still three phases of the memorial that are going to be done. One is going to go up in East Carbon, one in Scofield and the last in Helper.

“You would not believe the people that have stepped up, from the littlest kid to the biggest corporation,” Ardohain said during his presentation.

Also presented at the commission meeting was the employee of the month. Rose Barnes and Frank Ori brought up Connie Julian and gave her the award. Julian is the office manager at Carbon County Recreation and has worked for it for about 13 years. They stated that she is a pleasant, hard working woman and that she is very easy to work with.

“She takes good care of me, that’s for sure,” Ori stated. 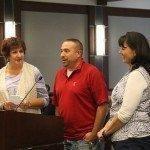 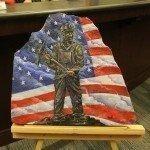