There were a few items of note at Wednesday’s city council meeting. Miss Carbon County Celeste Smith addressed the council. She explained her platform and invited the council to participate in “Walk a Mile in Her Shoes” this Saturday at 10 a.m. The walk, which raises awareness about domestic violence, will start at the Price River Trail and Walkway.

The next item of business concerned Grassy Trail Water Company. The company has requested a takeover by Price City because they serve only a few houses. The issue discussed at the meeting was the need to upgrade water meters that would cost the company $4,500, which Grassy Trail Water Company agreed to pay. The issue was moved to unfinished business.

The council presented Mireya Molinar, of Price, with a scholarship for college expenses in the amount of $650. The scholarship is awarded to a local resident who can show outstanding dedication to the community. Molinar was Smith’s first attendant in the Miss Carbon County pageant.

Several encroachments on city property were also discussed. The city had given permission to Kerry Jensen in a past meeting to encroach on city land and the land has remained in this state for many years. Therefore, the city is discussing the sale of the property to adjacent landowners.

“It will be nice to see the place cleaned up and a nice, straight property line,” said councilwoman Kathy Hanna-Smith.

The council voted to “get the ball rolling” for this resolution, which will begin by contacting the landowners about whether they want the land. The land in question is located around 850 North 100 East.

The state of water was also discussed. Gary Sontag, director of public works, explained that the water level of Scofield has remained the same, but there isn’t any more snow to feed it, whereas at the previous meeting, he had reported 12 inches of snow pack.

“We still don’t know what our needs will be like,” said Sontag, speaking about the water situation during the summer.

The council also discussed the restoration of a painting on the side of city hall. Work will begin tentatively in October of this year. 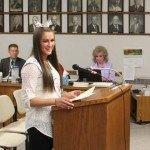 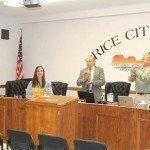 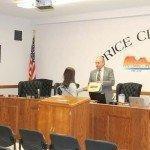 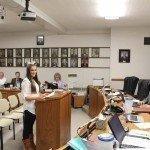 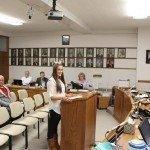 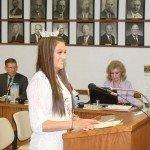 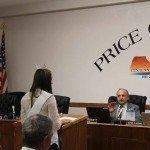