The following is from a press release the Emery County Sheriff’s Office:

Emery County Sheriff’s Office Dispatch received a call from an individual at 1:51 a.m. on Tuesday, 5/28/13 stating that his father was overdue from a trip to Goblin Valley. He stated that his father, Lawrence “Larry” Fitlow had left Goblin Valley at approximately 10:30 a.m. on Monday, 5/27/13 to travel back to his home in Park City. He failed to show up for work on 5/28/13, which was out of character for him. An attempt to locate was broadcast, and Goblin Valley State Park personnel were notified.

An Emery County deputy responded immediately to Goblin Valley in an attempt to locate Fitlow. He searched the State Park and surrounding areas with no sign of the missing man. At approximately 10:30 a.m. on Wednesday, 5/29/13, Goblin Valley State Park advised that Fitlow had made his way to their Visitor’s Center.

An Emery County deputy picked Fitlow up at the Visitor’s Center and transported him to the place he had abandoned his motor home. Fitlow stated that he had left Goblin Valley on Monday morning following directions given by his GPS. He stated that GPS instructions had indicated that he could follow a certain road and that it would connect him with SR24. He followed the GPS instructions until he could go no further, at which time he turned his 37’ motor home around in a wash. As he was headed out of the wash, the motor home became stuck in a rocky area. The drive line on the motor home became twisted and it received additional damage.

Fitlow spent Monday and Tuesday nights in the motor home, and then attempted to walk out of the area on Wednesday morning, 5/30/13 with his dog. The motor home was approximately 9.5 miles from Goblin Valley State Park Visitor’s Center, and he travelled on foot approximately 3.5 miles at which point a couple picked him up in their vehicle and delivered him to the Visitor’s Center.

Fitlow and the dog were reported to be in good health. 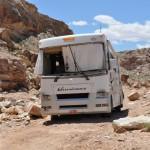