While the new $18 million Carbon County courthouse, funded partly by government grants, is being rapidly constructed on 100 North in Price, there remains mixed emotions about the new facility from members of the community.

Recently, the construction site donned a sign claiming “Wasted Carbon County Tax” with an arrow pointing at the new building. The sign was posted sometime during a weekend and was removed by construction workers on a Monday morning.

A few days later, the site had two more signs hanging on the fence. They read “New rec center,” which was crossed out, and “3 Kings Castle.”

The last signs came with signatures. Nick and Angelica Kiahtipes and Zach Barney hung the signs to express their desire to focus more on the youth and progression of the community by means of a recreation center versus a new courthouse. They claimed the sign “3 Kings Castle” indicated the Carbon County Commissioners and their support of the new courthouse.

According to commissioner Jae Potter, no action has been taken against those who posted the signs and no action is planned at this time.

“With every government project there are going to be people who don’t like what is going on,” Potter stated. “We held public hearings trying to make people informed.”

Despite attending these meetings, Nick still disapproves of the route the county is taking with the new courthouse.

“Instead of focusing on making the justice and jail system bigger, the community should focus on the youth before anyone can go down that path,” he explained. “My concern is that there is no safe place for kids to go. It would be great to have a rec center so that kids have a safe place to go, hangout and stay out of trouble.”

“Go to the base of the problem, give kids something to do,” he stated.

While the amount of children using a recreation center would be high, the center could benefit people of all ages from Carbon County, according to Barney.

“Think of everybody that can benefit if we put the money toward a recreation center,” Barney said. “Help the majority, not the minority (those in the court system).”

Nick suggested that community members should write letters to elected officials to make their opinions and concerns known. He also suggested attending commission meetings to show interest in the happenings of Carbon County.

“Don’t get me wrong, I appreciate all the commissioners do,” Nick finished. “But where my problem lies is how they go about this.”

At this time, no official plan has been made for the use of the current courthouse. According to Potter, the county is looking at three options for the building, none of which he was ready to disclose.

“Our intention is not to just let it sit,” he affirmed. 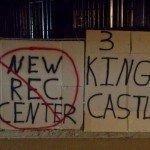