Mont Harmon Junior High was forced into lockdown this morning at approximately 11:45 a.m., after reports were received that a student possibly had possession of a gun.

Barnes explained that no gun was found and everyone at the school is safe.

Currently, police are interviewing the juvenile suspect as well as witnesses to determine exactly what occurred at the school.

On April 23 at about 11:30 a.m., an eighth grade male Mont Harmon Junior High School student reportedly displayed a firearm to a fellow student. The student with the firearm hid the gun on school grounds. The student who had seen the gun made a report to school officials immediately at 11:45 a.m.

Upon being notified, school officials immediately contacted Price Public Safety Dispatch. Dispatch put out the call of a student with a gun at 11:46.  The school was immediately put on lockdown by school officials. Officers from Price City Police, Carbon County Sheriff’s Office, Helper Police and Adult Probation and Parole responded, arriving on scene by 11:48.

Carbon County Deputies engaged the student who had the gun at 11:54 and had him safely in custody by 11:55.

School Resource Officer and Price Chief Kevin Drolc interviewed the student while other officers interviewed witnesses.  After initial denials, the student revealed he’d hidden the gun on school property and led officers to the gun. Officers retrieved a Colt .38 revolver that was unloaded. No ammunition was present at the school and no one was ever threatened with the gun.

Within 45 minutes the situation was resolved, the lockdown was lifted and students resumed their lunch periods and normal school operations.

The male student has been taken to the Price Youth Detention Facility. Other aspects of the investigation are ongoing. 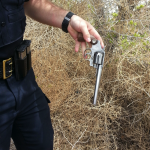