Mont Harmon pulled ahead early with a substantial lead against San Rafael Jr. High. The Bulldogs battled back in the third quarter to bring the score close. The Pirates ultimately triumphed 69-60. Hillam led the team with 17 points and nine rebounds. Point guard Woodhouse brought in seven buckets and three assists. Collin Lewis and Ty Anderson each chipped in 10 points. Hillam racked up nine rebounds and Jon Banasky brought down eight.

Coaches Jarad Hardy and Darin Lancaster are working to develop the team and all players had substantial playing time in both games.

“The boys have really come together as a team. They have been sharing the ball very well,” added Hardy.

This week, the team will face Canyon View on Wednesday and Uintah on Thursday. Both games will be at home. 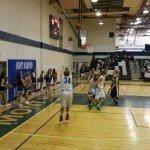 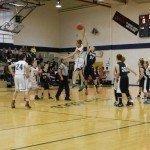 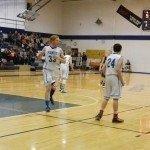 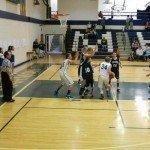 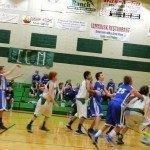 Ty Anderson makes a foul shot against Green River. He continued to score a total of eight points for the team.