On the left side of this photo the new raised edges of the building are being constructed. The right side is where the cafeteria is and this type of construction will not take place until next summer.

When Mont Harmon Junior High (now Middle School) opened in the late 1960s, it was an up-to-date school that served the needs of the student-body and school employees well. State-of-the-Art at the time, it was one of the most modern schools in the state.

But almost 50 years later, the school has seen not only good times but some bad times as well. The present roofing system has been giving administrators headaches for years. Flat and featureless in many ways, its drainage has been poor and the coating on it has been penetrated a number of times by flying debris and other incidents.

This summer, that will all change and more will be included in a building the district wants to use for a very long time.

“We are looking to preserve the use of this building for another 50 years,” said Kerry Jensen, Director of Maintenance for Carbon School District one morning in mid-June as he stood on the roof showing how things will change. “This new roofing system and what goes with it will work well and provides a lot more than just a roof for the building.”

As with many big buildings built in the 1960s, the central heating system had become outmoded and inefficient. Some rooms were always cold in the winter, others very hot. In the early fall and late spring, the lack of cooling made life miserable for everyone.

Thus, the new capital project that began the day school was out this spring will solve both the school roofing problem and the heating/cooling dilemma. Along with a built up roof membrane that will provide proper drainage, new roof heating/cooling units will be installed with individual control by almost every area they serve.

While some might wonder about the cost of putting in individual heating/cooling units, Jensen said it was a no brainer once the district explored the possibilities.

“You pay the same for a heating unit or a heating/cooling unit, so we decided to go with both,” said Jensen. “And as to the efficiency, these new units will be much more efficient overall than the old hot water/steam system that used to serve the school.”

Around the outside of the school, those that drive by can see wooden structures being added to the top edge of the building. Those structures will be used to raise the edges of the structure so that there is no longer a flat roof, but one that drains to the drainage system instead of having moisture sitting in place and building up as ice in the winter. The numerous patches on the existing roof also demonstrate the need for a new membrane. Along one part of the roof in the center of the school are a series of mends that look almost like they were stepping stones on top of the existing roof.

“A fly door over there on the central part of the building where the fan rooms were blown off in a strong wind one day and did a dance across the roof, end over end, puncturing the roof almost in a pattern,” said Jensen.

The remodel will take place over two summers with the classroom and administration areas being done this summer. Next year, the shops, cafeteria and gym will be completed.

In addition, the administrative office area is being remodeled for more room and for security purposes. Those entering the school during the school day starting this fall will have to pass through the west main doors and through the main office before they can get into the building.

“It all comes with the times,” said Jensen who said the district is working on all kinds of security measures to keep the student-body and faculty safe. “Things in the building look like a mess right now, but it will be ready for school when the year begins.” 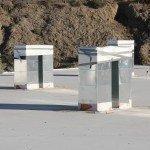 Vertical air ducts are in place in many places where heating/cooling units will be placed upon them. Those in classrooms and other spaces will now have individual control of the temperature in the rooms. 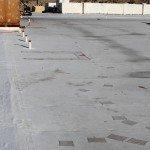 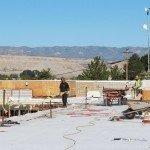