“Art explorations classes are a chance for students to try different and unique mediums. It is exciting to see students create projects that they are proud of, even though they wouldn’t label themselves as artists,” said Tina Frame, one of the art explorations teachers.

Currently, the classes are creating string art. They started with a raw piece of wood that they sanded and stained. Then, they chose patterns and pounded the nails into their board; some pieces of art contain over 150 nails. Finally, they wove string around the nails to make a beautiful picture.

Not all electives are fluff as some people think; some are based on core subjects. Anatomy is traditionally taught only in high school, but many students were interested, so Mont Harmon offered it.

“I took anatomy because I wanted to learn more about the human body. Mr. Cisneros has taught a lot about bones, muscles, the nervous and cardiovascular systems. It is a lot of cool information that I didn’t know,” said Carter Warburton, seventh grade student.

Mont Harmon has purchased several 3D printers and the students in gifted and talented classes are using them around the clock. They are learning 3D design and creating their own innovations. This semester, students were challenged to find a problem in their lives and then create an invention to solve it.

Case Griffeth, a sixth grader, was tired of struggling to get his soccer socks off after practice. He invented a “soccer sock puller offer.” He commented, “It was actually really fun to learn how to 3D design and print. It was fun to learn how to think of new ideas to solve a problem and then create a solution.”

“Over the year, about 60 kids will learn the basics of slow dancing, swing, line dances, break dancing and hip hop as well as the history of each style of dance. In addition, they will learn the science of how the human body makes motion,” said Brandon Stephens, science and dance teacher.

“We started practicing in the beginning of July. The boys have worked really hard to bring our region title back. They fought through some major adversity this season to win this title. COVID and injuries set us back… but the guys stepped up to fill roles of missing players. It was a full team effort,” explained Coach Jordan Blanc.

The team secured the title on Oct. 7 when they played at Helper and garnered a 46-0 victory. 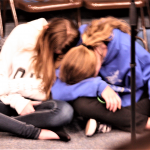 Students learned from Jeff Bliss, hypnotist and motivational speaker, about the power of their minds to resist drugs and alcohol. Here, two students are hypnotically out. 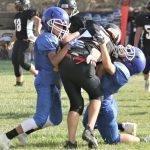 Mont Harmon won the football game with Helper to end up with a 5-1 region record. 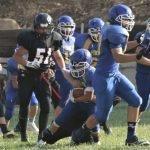