Mont Harmon varsity basketball opened their season with back to back wins against San Rafael Junior High and Uintah Middle School.

The team was victorious Tuesday in a nail-biting, double-overtime game against San Rafael Junior High. The final score was 45-43.

San Rafael pulled out early in the game, at one point leading by a margin of 13. The bulldogs scored 17 points in the first quarter. Mont Harmon battled back with a full-court press and only allowed them to score 26 more points over a span of 32 minutes. When the final buzzer rang, the score was tied at 33.

During the first overtime, Tyler Wright made 4 free throws, helping the Pirates’ cause, but the bulldogs battled back to tie the score at 40-40.

The second overtime period, was marked with difficulties as the pirates’ reserves on the bench were getting thin. When overtime began three players had fouled out, and Brady Gagon was on the bench due to an injury he received earlier in the game. Coach Jarad Hardy, who was holding back Carson Frame because of a pulled hamstring, was forced to put him in. With 2 minutes and 13 seconds left, pirates player, Mike Banasky fouled out. The pirates were forced to combat the Bulldogs with a partial lineup.  Players Wright, Frame, James Bryner,and Carter Sorenson doggedly came through against San Rafael’s full slate.

Tyler Wright lead the team with scoring 16 points, 8 rebounds, and dropping 100 percent of his foul shots. “Wright and Banasky stepped up to lead our team in this game,” commented Hardy.  Banasky presented a tough defense with 6 steals and 10 rebounds.

“Both the bulldogs and the pirates worked hard the entire game. No one backed down.  It is a meaningful victory for the team,” said Hardy.

At Uintah Middle School on Monday, pirates garnered a 54-14 win.

“Kaleb Nelson lead the offense by making good decisions with the ball,” Hardy added.  He garnered the most buckets, with 10 points.   As a well-rounded player, he scrapped for 9 rebounds, 4 steals and 4 blocks.

Next week Mont Harmon plays Pinnacle Charter School on Wed.  The team is under the direction of Hardy and Darin Lancaster. 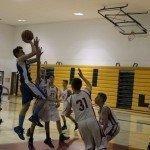 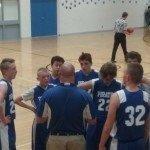 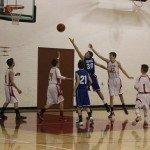 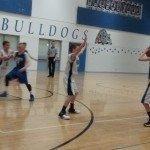 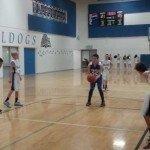 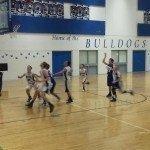