Second place speller Adriana Johnson, 6th grader from ARL Middle School in Blanding, and Jordan Clinger, third place, competed with Garrett through rounds 7 through 18. Jordan was eliminated when she misspelled “eitlander.” Adriana and Garret continued correctly spelling “schottische” and “muishond,” but both misspelled the next round words which required them to continue on to championship round 21. After Adriana misspelled her word, Garrett correctly spelled “basilisk” but was required to correctly spell “alphanumeric” to clinch first place honors.

Sponsored by the Southeast Education Service Center, this year’s Region Bee was held at Grand High in Moab. Thanks to Diane Carter, Emery High School English teacher, who was this year’s pronouncer. Theresa Wilson and Johnna Boyack served as judges. The region bee is a preliminary competition in the Scripps National Spelling Bee held during Bee Week May 28 through June 2, 2017, in Washington D.C.

The top three district spellers, plus Pinnacle Academy, grades 4 through 8 advanced to the region bee from bees held in their local schools and districts earlier this year.

The Scripps Bee is the nation’s largest and longest-running educational promotion, administered on a not-for-profit basis by The E.W. Scripps Company and Kindle as presenting sponsor. The bee’s purpose is to help students improve their spelling, increase their vocabularies, learn concepts and develop correct English usage that will help them all their lives. Since 1925, children across America have participated in school, local and regional bees with the singular hope of making it to the Scripps National Spelling Bee in Washington, D.C. This year, 11 million students will join in the experience.

Contestants at the Scripps National Spelling Bee must be 8th graders younger than 15, but there is no lower age limit. It seems great spellers just keep getting younger. Last year, the youngest speller was a 6-year-old Texas boy. This year, 5-year-old Edith Fuller will be the youngest person ever to compete at the spelling bee.

Congratulations to all the region spellers who competed and best wishes to Garrett in the National Spelling Bee this year! 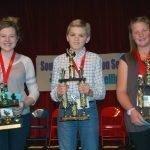 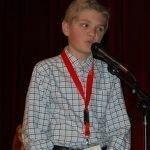