The Mont Harmon middle school football team won their third game of the season on Saturday against Moab. They improved their record to 3-0 with the win.

A strong running attack with Collin Lewis, Isaac Quintana and Austin Woodhouse racked up a combined total of 170 yards with a long run of 48 yards the second play of the game. The final score of the game was 28-15.

Three different receivers caught touchdown passes including Derick Hillam, Daniel Vega and Zack Gibson. Mont Harmon’s offensive lineman gave Austin Woodhouse plenty of time to deliver the ball to receivers and they dominated the line of scrimmage, which really set the tone for the game. The defense held Moab on four key fourth down attempts, which allowed the Pirates to control the time of possession and the game.

The pirates next play at Canyon View in Huntington on Thursday, Sept. 18.  Kickoff is at 3:30 p.m. 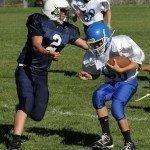