The number of mule deer in Utah is growing. If you’re a deer hunter, that’s great news: it might mean more chances to hunt deer in the state this fall.

Division of Wildlife Resources biologists are recommending a total of 87,050 general deer hunting permits for this fall’s hunts. In 2014, a total of 84,800 permits were offered.

Starting the week of March 23, you can see all of the big game permit recommendations online.

Plans that will guide the management of mountain goats in Utah on various management units will also be available to review.

After you’ve reviewed the proposals at wildlife.utah.gov/public_meetings, you can let your Regional Advisory Council members know your thoughts by attending your upcoming RAC meeting or by sending an email to them.

RAC chairs will share the input they receive with members of the Utah Wildlife Board. The board will meet in Salt Lake City on April 30 to approve permit numbers for Utah’s 2015 big game hunts.

Dates, times and locations for the RAC meetings are as follows:

You can also provide your comments to your RAC via email. Email addresses for your RAC members are available online.

The group each RAC member represents (sportsman, non-consumptive, etc.) is listed under each person’s email address. You should direct your email to the people on the RAC who represent your interest.

The following are the total number of permits biologists are recommending:

Most of the additional permits would be for a high-country buck deer hunt on unit 8a (the North Slope/Summit unit).

Justin Shannon, big game coordinator for the DWR, said the deer population on unit 8a, which sits next to Utah’s border with Wyoming, includes some really big bucks. “Unfortunately, many of those bucks head to Wyoming before the general rifle hunt starts,” he said.

The high-country buck deer hunt will be held Oct. 3–15.

“Starting the season that early should get hunters into the area before the bucks leave,” Shannon commented.

Biologists base their deer hunting permit recommendations on deer classifications they do each year. During the classifications, biologists survey deer on their winter ranges to determine how many bucks, does and fawns are in the herds.

What the biologists found during their most recent survey should be encouraging news for hunters and wildlife watchers alike:

Over the past five years, biologists have placed radio collars on hundreds of deer across Utah. Placing the collars allows biologists to track the deer and know when one of them dies. Based on data gathered through the survey, biologists estimate 84% of the doe deer in Utah and 82% utaof the fawns made it through 2014.

“Those are great survival rates,” Shannon said. “There’s no question that mule deer populations are growing in Utah.”

Why are deer doing so well?

“We’re really excited,” Shannon said. “Utah’s deer herds are in the best shape they’ve been in since the early 1990s.” 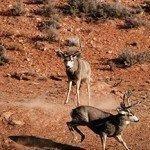