A call came into the Emery County Sheriff’s Office (ECSO) dispatch on Friday at 3:11 p.m. regarding an accident in the San Rafael Swell. The individual that reported the accident had to drive over nine miles to obtain cell service for the call.

According to reports, the accident occurred at Tan Seeps Road. The victim in question was a 35-year-old male, native to Utah, who was traveling on a Dual Sport KTM motorcycle.

The first to arrive on scene included a Classic Air helicopter out of Moab followed closely by the Emery County Sheriff’s Office Search and Rescue. It was determined that the model of motorcycle was quite heavy and, combined with the speed around a curve, were factors in the crash.

The driver was on a ledge that was approximately 10 feet below the road, according to the Emery County Sheriff’s Office. Upon Emery County Sheriff Greg Funk’s arrival at the scene, responders had worked to package the driver into a stokes basket and were in the process of carrying him back to the road.

The driver of the motorcycle was transferred by the helicopter to a hospital. However, the name of the patient and the condition are not being released due to privacy. 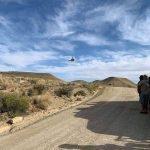 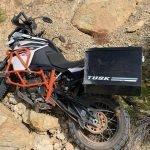 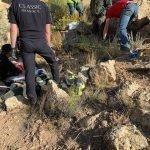 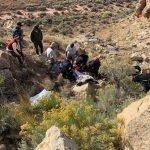