The Carbon High boys tennis team wrapped up their regular season with a homeВ В match against Delta on Tuesday, May 7.The team fell just short of their first team win as impending rain forced the final match into a super tie-breaker.
Coach Pete Riggs was veryВ disappointedВ with the outcome, because his team was playing well and he felt like they stood a great chance of taking the win if they would have played a regular match. 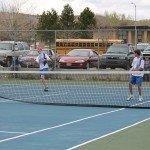 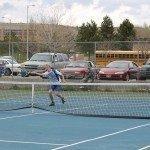 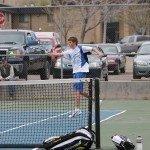 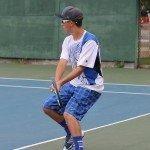 Cameron Shiner sets for the serve 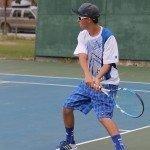 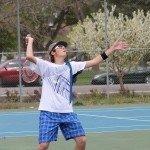 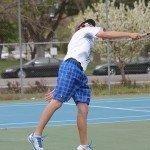 Robbi Etzel serves up a smash in his doubles match 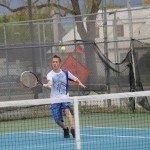 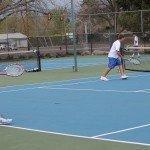 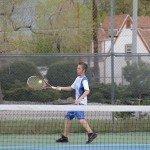 Forest Daniels looks solid as he keeps the ball in play


“It looked like it would pour any minute,” he said, “so both coaches got together and decided this might be the best way to go. It didn’t end up raining and so I wish I would have done it differently. We came up just short and I know the kids areВ disappointed
But Riggs went on to say that overall he is pleased with the enormous progress his team has made this year. It is a young squad with only two seniors, so he is even more confident about next season.</p>
Cameron Shiner played well despite a previous knee injury. Robbi Etzel and Andrew Richens had some solid play in their doubles match. Forest Daniels, Zane Whitmer and Jaynin Callie put together much improved performances.
The Dino squad will head to Manti for region matches this Friday. Only three of the five teams will move on to state out of the region and Riggs is feeling good about the team’s chances of grabbing one of those spots.
Even if Carbon does not qualify as a team, they can earn a spot as a single or doubles teams. The state meet will be in St. George the following Friday.