The Carbon County Commission meeting was held Wednesday evening. Many people were in attendance due to specific items that were discussed.

First, Carbon County Human Resources Director Rose Barnes and Julie Medley from the assessor’s office gave out the award for employee of the month. This month, two women were awarded. Denise Knowlden and Sulika Merrell are both from the assessor’s office. Merrell has worked with the office for approximately three or four years while Knowlden has been there for a couple of years.

After the employee of the month awards were given, Debbie Marvidikis who is the leader of the local Hope Squad proudly presented awards to three law enforcement officers. She awarded Travis Henry, Brandon Sicilia and Mike Hrienson for their courageous efforts in assisting a citizen that had attempted to commit suicide. She stated that she was overjoyed with them being successful in assisting the person and was grateful that another life was not lost to suicide.

Thirteen-year-old Doug Larsen who is a member of the Boy Scouts of America stood in front of the commissioners with a special request. Larsen has been working hard in the attempt to get a couple of backboards put up at the tennis courts for people to partake in single hitting. He requested from the commissioners a small donation to put toward the effort. The school district had already granted Larsen a $1,500 donation and Price City stated it would pay for the rest after other donations were received. Larsen asked for a $1,000 donation from the commissioners. Commissioner Jake Mellor congratulated Larsen on getting started on his project at such a young age. Larsen was directed to a recreation transportation meeting at which he could speak before a donation is granted from the commissioners.

Another point of interest that came to light at the meeting is that Verizon Wireless would like to build two new sites in town. Jared White from planning and zoning spoke with commissioners and said that both sites would be at opposite ends of town. The goal is to have better coverage in the area. It was confirmed during the meeting that the site build on Airport Road would not get in the way of oncoming air traffic. The approval of the site by commissioners does not make it final. White stated they also need approval from the FAA and the FCC. The motion to approve the Verizon towers was passed. 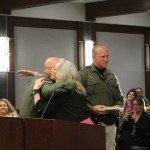 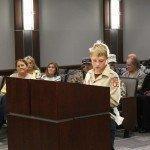