“Spike 150: Helper and the Railroad,” an exhibit commemorating the rail history in Carbon County, will open Friday, May 3, from 4 to 9 p.m. at Anne Jespersen Fine Arts at 167 S. Main St. in Helper. The exhibit will run through August 2, 2019.

Among the featured paintings are two discovered works by John MacQuarrie, a 19th century artist whose murals are featured in train stations across the West, including at the Union Pacific train station in Salt Lake City. The exhibit will showcase MacQuarrie’s painting of President Abraham Lincoln and Leland Stanford at the signing of the Pacific Railroad Bill on July 1, 1862, endorsing the building of the California line that was to connect to the Eastern line at Promontory Point in Utah. It also features a work depicting the construction of the Transcontinental Rail Line causeway over the Great Salt Lake that was completed in 1869. Some speculate the works might be studies for larger murals he planned to paint.

While a Salt Lake City resident, Rick Harper discovered the paintings in the early 1990s while remodeling his Victorian home on 3rd Avenue. Beneath lath and plaster walls in the kitchen were some boards and wallcoverings he loaded into his truck to take to the landfill. “While I was loading my truck, I happen to turn one of the pieces over and I found myself staring into the face of President Lincoln,” Harper recalled. “I said to myself, ‘Oh my heavens, what have I done? I have just ruined a painting?’”

He sorted through the debris to look for more pieces of the painting and found another piece from a second painting. “So then I was saying, ‘Jiminy, have I really destroyed two paintings? What have I done?’” asked Harper. He continued to sift through the debris and found all the pieces to the two paintings. Elizabeth Provost, an art conservator in Salt Lake City, restored the paintings, which were purchased later purchased by Zions Bank. Harper later retired and moved to Helper.

“It remains a mystery how they ended up in Rick’s home. The paintings were facing inward on the wall, rather than outward, as though they were being hidden,” said Roy Jespersen of The Helper Project, a nonprofit that promotes beautification and cultural activities in Helper. “Our new exhibit offers visitors a rare opportunity to experience these historic paintings along with those of contemporary Utah artists’ which commemorate the completion of the transcontinental railway.”

Zions Bank, a division of ZB, N.A., is Utah’s oldest financial institution and is the only local bank with a statewide distribution of financial centers, operating 97 full-service centers. Zions Bank also operates 24 full-service financial centers in Idaho and Wyoming. In addition to offering a wide range of traditional banking services, Zions Bank is also a leader in small business lending and has ranked as the No. 1 lender of U.S. Small Business Administration 7(a) loans in Utah for the past 25 consecutive years. Founded in 1873, Zions Bank has been serving the communities of Utah for more than 140 years. Additional information is available at www.zionsbank.com. 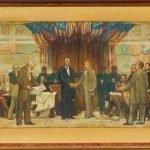 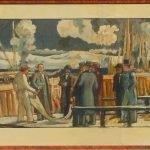