With nearly 40 students in each class, Mr. Ben Carroll conducted three choirs and then combined them for a final number. The largest choir, sixth grade, performed four numbers with Mr. Carroll accompanying them on the final one, “Lift Up Your Hearts and Voices.”

The seventh grade choir was divided with the boys singing “Blow Ye Winds” and then the girls joined to perform an Israeli song entitled “Dodi Li.” A girls’ choir of seventh and eight grade students sang ”The Arrow and The Song” followed by the entire eighth grade choir.

All three grades’ choirs then combined for the final number entitled “We Are The Ones.” 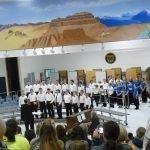 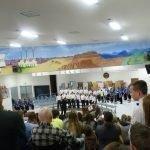 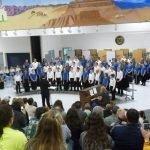