Pictured: Sarah Norton explains the goal of American Supports One, a new business, during Wellington’s City Council meeting last Wednesday. Norton as well as Nicholas Bates were each awarded business licenses at the meeting.

Clayton Graham, Merridith Kikkert and Randy Larsen were appointed as volunteer firefighters during the meeting.

Also at the meeting, two business licenses were awarded.

Sarah Norton, a Wellington native, took the opportunity to speak about her business, American Supports One. The business is to assist adults with high-functioning autism with life skills needed in various spheres.

“Thanks for coming back to Wellington,” Mayor Joan Powell said.

The second business license awarded was to Nicholas Bates and his business, which will operate under the name SKJALDBORG.

Bates will operate his business through online channels. 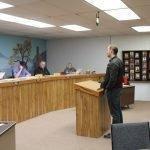 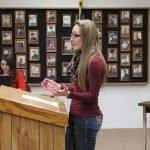