On Wednesday, a public press conference took place at the Carbon County Event Center announcing new companies that are coming to the area. Carbon County Economic Development and the Southeast Utah Association of Government/Business hosted the conference.

Carbon County Economic Development Director Tami Ursenbach opened the conference, speaking briefly about the importance of work in the area. She stated that bringing in new businesses is not a task that is easily completed alone and she did not want to take full credit. Todd Thorne with the Business Technical Assistance Center (BTAC), along with The Department of Workforce Services have been working along with Ursenbach to make this a reality.

The representatives of Day Pacer were unable to attend the conference, leaving Ursenbach to speak about the company. The company is for people that would like to work at home. The work will consist of answering phone calls or calling those that request information from its website on education. Fifteen people in the area have already been hired, with an additional 10 employees being hired every six to eight weeks. The job will begin at $12 an hour and can possibly move up to $18 an hour depending on the individual’s work. Benefits are included in this job. Day Pacer asked Ursenbach to be sure and give a special thanks to Thorne at BTAC and Workforce Services.

The next business that presented at the conference was Direct Business Lending. The company was represented by Jansen Fugate and Brent Stockdale. It is a financial company that has been in business since 2009 with a current office in Sandy. Direct Business Lending has been in the area for about five weeks and already has nine employees with a goal to scale up to 50 over the next 12 to 24 months. The company is looking for individuals that have no telemarketing experience but are comfortable with getting on the phone. A thorough training is provided. Fugate stated they will probably be hiring five people within the next week. Employees are started at $10 an hour plus commission with the ability to make upward of $18 an hour. Direct Business Lending will operate in the BTAC center.

Chris Nickelson with Key Research solutions next presented his business. Nickelson stated the company came to Price with the idea of giving part-time jobs to college students. He has been in the industry for 25 years, starting when he was attending college. The job is market research and conducting surveys over the telephone, representing political committees, school districts and more to see what voters want. Key Research Solutions is looking to hire between 100 to 125 part-time college students and older high school students. The job is an evening job with a flexible schedule. Pay is $10 an hour and the business is located on east Main Street.

The last company to present at the conference was Direct Response. Direct Response is a call-center job, taking phone calls for infomercials. Joel Smith and Dean Lumberg spoke about the business. Lumberg stated there is a need for job diversity in the community and the company is trying to achieve that. There is a current facility open in Richfield and the Price location will also be located in the BTAC center, which has E-Fiber for improved productivity for the business. According to Ursenbach Emery Telcom’s E-Fiber product was a key component in attracting Direct Response to choose Carbon County.

At the close of the conference, Ursenbach stated that some people might believe that the area does not have enough workers for the businesses being brought in. However, when speaking with The Department of Workforce Services, it was discovered that 900 people between Carbon and Emery counties want to work in a call center-type environment. It was also discovered that 300 people in the area are looking for IT work. “We do have the workforce here, we’ve got a strong workforce,” Ursenbach said.

Three hundred full and part-time jobs are coming to Carbon and Emery counties. 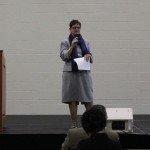 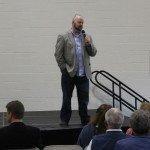