Since testing began, Carbon County has had 78 cases of the virus. Of these, 57 patients have recovered, leaving 21 active cases. One patient is currently hospitalized while three other patients were formerly hospitalized but have since been released. There have been no deaths attributed to COVID-19 in Carbon County.

Emery County also has no confirmed active cases at this time. Since testing began, 16 patients in Emery County have tested positive for COVID-19. All of these patients have reportedly recovered with no hospitalizations or deaths attributed to the virus.

There have been over 8,439 COVID-19 tests conducted throughout Carbon, Emery and Grand counties. For case breakdowns, see the graphs below. 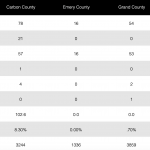 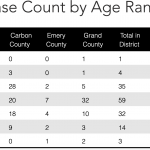