The Emery Town Council meeting on Wednesday was called to order by Mayor-Pro Temp Lyndsay Edwards. The former mayor, Amy Sundstrom, resigned in November and Edwards has been serving as the mayor. New recorder Amy Sundstrom then administered the Oath of Office to newly-elected Mayor Jack Funk and new councilwoman Kimberly Hansen as well as incumbent council members Michael Christensen and Lyndsay Edwards.

Mayor Funk then called for a vote to approve the previous month’s minutes as well as paying the invoices. All council members voted in the affirmative with the amendments to the minutes. Mayor Funk then said he was glad to be the town’s new mayor, stating that he is desirous to serve the people of Emery.

He gave all his phone number, vowing he was available for anyone from 7 a.m. to 7 p.m. everyday and anytime when there is an emergency. Funk then requested each council member share what their assignments and responsibilities have been.

Councilman Christensen reported Planning and Zoning, including helping to secure building permits. Councilwoman Edwards stated she has worked with the historical and beautification committees. Councilman Sundstrom reported animal control and serving on Castle Valley Special Service District board as his responsibilities.

The mayor then asked councilwoman Hansen to consider budget and finances her stewardships. He complimented the council for the service they have given to the town and expressed his appreciation to each member. He also asked them to consider goals and ideas for each of their areas and the town as a whole.

Following this, the meeting schedule for the coming year was discussed and will remain the same. Emery Town Fire Chief Scott McClaughry then reported training as one of his goals for the firemen, stating that he would like everyone to obtain their red card. He also spoke about the need for equipment and the possibility of fundraisers to fund the desired equipment for the fire department. The mayor expressed his desire for an expansion plan for the town and finding options for growth.

Next, Councilman Sundstrom reported on his attendance at the Castle Valley Special Service District meeting, stating that curb and gutter near the cemetery was approved and will be done this year. He also said that the concrete linings for the ponds at the city water shed should be done as well.

Mayor Funk concluded the meeting by reminding the council and audience that he welcomed contacts and questions, stating that he wants to be everyone’s mayor. He stressed it is important to him to mitigate concerns before they became a problem. 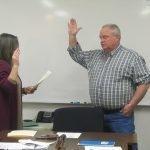 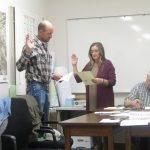 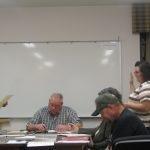