It is that time of year again! The first high school rodeo of the season gave ninth graders a chance to participate, and some have already qualified for state by placing in Oakley at the South Summit Rodeos on Friday and Saturday.

Those ninth graders placing were Emery’s Drake Weber and Devin McKee, who placed 10th in team roping, and Carbon’s Kagen Rhodes in both rifle and trap shooting. Some of the other ninth graders on the trail this past weekend included Hagen Campbell and Brandle Colonna from Carbon and Emery’s Hailey Allred, Jessica Fox, Korby Christiansen and Jessie McElprang.

Carbon’s Morgan Jensen was fifth on Friday and seventh on Saturday in the barrel racing event. She also earned seven points placing fourth in the poles on Friday.

On Thursday evening, Emery’s Riata Christiansen was crowned queen of the rodeos and she qualified in eighth place in goat tying on Saturday and tied for sixth in reining cow horse competition. Emery’s Hayden Cloward and partner Whitt Crozier from Uintah were third in the team roping on Saturday.

The high school rodeo schedule continues this weekend in Vernal for the Uintah Basin and Rich High rodeos. On Sept. 9 and 10, the competition will be in Panguitch. The following weekend, Sept. 16 and 17, the event will be hosted in Salina and then Sept. 23 and 24 in Cedar City. Contestants then have a break until the second weekend of November when the Dixie 6 will begin in Hurricane. 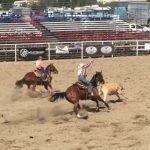 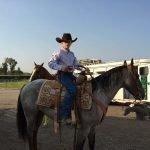