Jessy Johansen recites the oath of office from Jared Black.

Jessy Johansen was sworn into the Emery County School Board on Wednesday evening and will represent precinct number 3. She replaced former long-time president Laurel Johansen, who recently moved from the area to serve a mission for The Church of Jesus Christ of Latter-day Saints in North Dakota. Jessy will serve the remaining two years in the previously vacated term. Because board presidents are selected annually in January, vice president Tracy Johnson will continue presiding the board until early next year.

Canyon View Middle School Principal Yvonne Jensen then reported to the board on the many activities going on at the school, including the success of new activities such as cross country. She relayed the added safety measurers that have been placed in effect and highlighted further installments to remain proactive in student safety. She also thanked the teachers and staff for their efforts to make Canyon View a great school.

Superintendent Larry Davis also spoke to those in attendance. One item in particular that he remarked on was that the Coal County Strike Force has been nominated one of three finalists in the American Dream Ideas Challenge and received $30,000 in funding to advance the proposal and a chance at $1 million in grant funding to pursue their objective, which is economic growth in the Carbon and Emery areas. 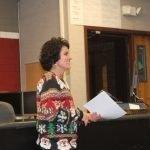 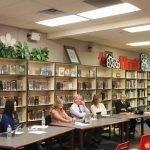