Councilman Rick Davis was approved to be the Mayor Pro Temp at the Wednesday evening Price City Council meeting as Mayor Michael Kourianos was unable to attend. The first item of business tackled by the council was the swearing in of a new Price City Police Officer.

Officer Michael (Mikey) Montoya was sworn onto the force by Judge Jon Carpenter, promising to protect and serve those in the community. Montoya was born and raised in Carbon County as a resident of Spring Glen growing up. Montoya always wanted a career in law enforcement and has been a firefighter and EMT for nearly 10 years. From there, Montoya wished to pursue farther into law enforcement.

“I’ve been enjoying every little bit of it and I’m excited to represent Price City,” he said.

Montoya signed documents in front of the council and watching crowd and was then welcomed by the council members.

Also conducted at the council meeting was the recognizing of the Foster Mother of the Year. This year, the award was given to Tammie Christensen, who has been a foster parent for over two years. In that time, Lead Foster-Adoptive Consultant Kobi Prettyman stated that Christensen has been amazing to support parents that are working to get their children back.

Christensen is always willing to take other foster kids and help other foster families, according to Prettyman. A plaque and gift basket was awarded to Christensen, who stated that she has always been passionate about children and is happy to be able to help them. A proclamation was also read by Councilman Rick Davis declaring May as National Foster Month. 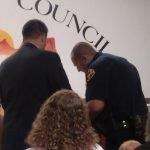 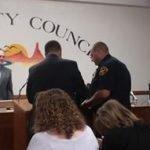 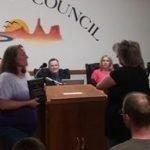 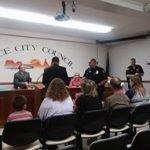