It’s been a little over a week since the brand new stoplight, the first of its kind in Emery County, flashed green in Huntington City and right now, Mayor Hilary Gordon says the reaction has been a “mixed bag.”

“Change can be difficult to manage sometimes,” Gordon said. “There are certain groups of people who can see the immediate benefits of the light now, but it might take other people a while to come around.”

Mayor Gordon pointed out that because the Utah Department of Transportation has taken out the 20 MPH school zone and flashing lights, there are many large trucks who still aren’t slowing down enough.

“Even though the speed limit is 35 MPH, the majority of people are still going at least 40 and some people as fast as 45,” Gordon said. “There have been trucks that don’t yield as soon as they should on the yellow light, or people who run right through the light, and that is where problems are created.”

Mayor Gordon is still currently working with UDOT to perfect the timing in between signal changes to help minimize problems like that.

Estelle Grange, who is the crossing guard at that intersection, warns people to be cautious when turning left onto southbound Main Street coming from the post office.

“Even though your light may be green, the right away still belongs to pedestrians who are crossing the street right there,” Grange said. “Just use common sense when you’re driving and be extra careful when there are little kids around.”

According to Mayor Gordon, UDOT did perform traffic studies and found that there were real problems with that particular intersection, which is why Huntington City went ahead with the project.

However, Gordon said she wasn’t fully aware they were taking the school zone speed limit away altogether from the area and said she has been in contact with UDOT about returning the 20 MPH zone or flashing lights.

“I asked for at least the flashing light to be reinstalled but I was told they needed to “think about it,’” Gordon said.
For now, the mayor requests that all complaints about the light or the speed limit in that area be directed toward UDOT. 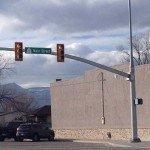 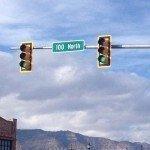 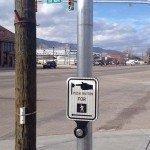