The Carbon High Debate Team must have set a New Year’s Resolution to add several victories to their records because, so far in the year, they have done just that.

Despite being a relatively young team, the Carbon High School debaters have managed several notable victories so far in their season.

The dynamic duo of Jaylee Co and Jovenn Morrison have managed to secure a first-place victory at the UDCA competition at Granger High School as well as shine in the NCFL National Qualifiers where the team qualified for the national competition.

Last weekend, the debaters continued their work at the Marie Clegg Jones Memorial Tournament at Utah Valley University among 50 schools from across the state.

Freshman Ashley Neep managed fifth for her original oratory, out of 80, and secured a place at the National Individual Events Tournament of Champions.

The Debate team will continue their work on Feb. 11 at Skyridge High School. 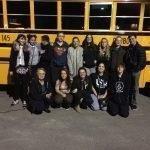