Nicholas Christian Willard Pacheco was born to Janet and Danny Pacheco on January 8, 1988 and left this earth on February 23, 2017. He was 29 years old.

Nick met the love of his life, Kaela Jenkins, within this past year and they lived together in Grand Junction, Colorado where they were raising their family.

Nick’s family meant everything to him. If he knew you, you were Nick’s family. Nick never forgot a favor that was done for him. Nick was a very kind and caring person who will not soon be forgotten.

Nick is survived by his loving fiancé, Kaela Jenkins, his boys, Ash and Belial, Nick’s mother and father, Janet and Danny, his loving aunt “Mama” Debbie Bumgarner, his grandmother, “Granny” Elnora Clark, grandfather John Polito, and many more aunts, uncles, nieces, nephews and cousins, and an unsurmountable number of friends.

This will be held outdoors and there will be no seating, as this is not a formal funeral, but a simple memorial. If you would like to bring a flower to put in a vase to be left there, please do so. 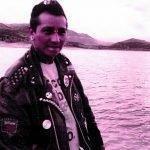