The Domestic Violence Coalition of Carbon County hosted a training and law enforcement appreciation event on Jan. 30. Various law enforcement branches from both Carbon and Emery counties attended along with local organizations who deal with domestic violence.

During the event, several peace officers and two public dispatchers were honored for their outstanding service involving a domestic violence situation.

Helper City Police Chief Trent Anderson presented officer John Stevens with a service award for his response to a murder/suicide call in December 2012.

Stevens was the first officer on the scene following a report of a suicidal subject. When the officer arrived at a Helper residence, he discovered the bodies of two deceased men, victims of a murder/suicide. Inside the home were several children and their mother.

Stevens response to this domestic violence case was honored through the service award presented by the police chief.

Price City Police Captain Bill Barnes also presented awards to officers Susan Hyde and Brandon Ratcliffe along with Price Public Safety Dispatchers Serena Weber and Darryl Barry. The award recognized the response of the officers and dispatchers to a call from a suicidal subject who reported that he had killed his wife and was going to turn the gun on himself.

Barnes explained that the incident occurred in February 2013 and unfolded as the couple’s children were in the home. The case ended as a murder/suicide and changed the lives of many. However, communication between public safety dispatch and various law enforcement agencies and individuals inside the home unfolded flawlessly.

Ratcliffe and Hyde were the first officers on the scene. The two made sure that the children were safe and comforted them during the moments that followed the tragic event.

Barnes also explained that various law enforcement agencies worked together to protect each other, the public and the family during this domestic violence incident.

Every call that officers respond to that involves a domestic dispute poses a danger to everyone involved. Pam Webster of the Utah Domestic Violence Coalition honored peace officers who have lost their lives responding to these calls.

Since 1911, eight police officers in Utah have died responding to a domestic violence incident. 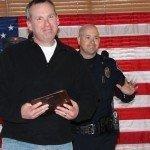 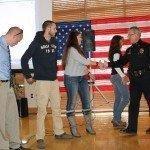 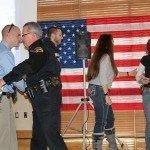 Awards are handed out to dispatchers and officers for their service on a domestic violence call. 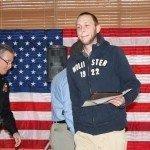