The Emery School Board meeting was hosted on Wednesday, Jan. 5 at the Little Theatre of the Spartan Center at Emery High. All board members were present as well as Emery County School District Superintendent Ryan Maughan and Business Administrator Jackie Allred. Previous to the regular session of the board meeting, a work meeting was held to consider the options of building the new school for Emery High.

As the regular session began, Emery School Board President Tracey Johnson welcomed everyone to the meeting and led the Pledge of Allegiance. Two presentations from Westland construction then gave an updated report on the projects at Ferron Elementary and Emery High phase 1 (sports complex). The information was presented by Trent Huntsman and Jessica Dahl, representatives from Westland.

Timelines and pictures of both projects were displayed on a screen. Although the cold weather and snow has hampered some masonry work at Ferron Elementary and the suspension in the third pouring for the tennis courts at Emery High, the projects are essentially on schedule. Another obstacle is the delivery delay of materials needed for construction.

The minutes from the previous school board meeting, along with warrants and monthly financial reports, were next approved by the board as well as the appointment of Alayna Ewell as the Emery County School District Food Director.

Business Administrator Allred, along with Alex Buxton from Zions Bank and Brandon Johnson from Johnson Farnsworth, then presented the resolution providing for the issuance of the general obligation bonds. This is for the remaining $25 million from the voted $75 million. The school district issued $50 million bonds for sale in March of 2021. They reported that because the interest was lower than expected over the 21-year pay off period, $4 million will be saved. They also reported that with the uncertainty of the federal interest rates, expediency in issuing the bonds for sale would be advantageous because, at the present time, rates are low. All board members approved the resolution unanimously.

Next, a donation from JN Auto in the amount of $25,345 was gratefully approved by the board. This will match the same amount coming from Emery Telcom that was approved in December. These donations will cover the full price of the scoreboard for the new EHS football/soccer stadium.

Later in the meeting, Allred expressed appreciation for other donations recently received. William and Rosie Wilson gave Huntington Elementary a donation in the amount of $2,500 and an additional donation to Huntington Elementary of $1,000 was presented by JN Auto. These amounts did not need approval by the board, but the board members did express gratitude for both donations.

Emery High Principal Steven Gordon then gave a report to the board about happenings at the high school. He stated that this year, they are trying to focus on publicizing their academic successes. Students involved in math, language arts, creative writing, debate, art shows, ProStart, the Future Farmers of America and the National Honor Society have had great success and have been publicized.

Another focus at the high school is improving ACT scores. ACT prep classes continue to be taught, bootcamps from USU-Eastern will be conducted and encouraging sophomores to take the tests early are all part of this focus. There will be a CTE fair on Jan. 21 at Emery High School. Principal Gordon also announced that 19 students have received Academic All State awards.

Emery County School District Secondary Supervisor Doug Mecham then recognized principals Gordon and Dean Stilson for their work at Emery High for the past 5.5 years. He mentioned some of the tasks they have been faced with, including the ninth grade entering, going to a block schedule, the pandemic and the construction of a new building. He presented them with gift baskets to show his appreciation. Mecham also reported that Kent Nelson, Green River’s FFA advisor, received a grant in the amount of $50,000 to help build the program.

To conclude the meeting, a motion was made to enter into a closed session. 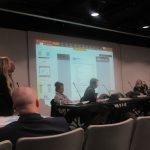 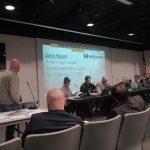 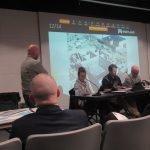 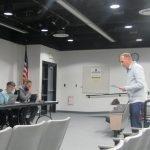 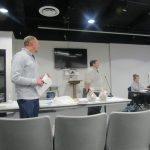