The first Orangeville City Council meeting of 2020 featured an oath of office ceremony for the members that will serve the city and its residents for a new term.

New to the council is Tracy Addley. Addley stood with incumbents Kirk McQuivey, Carol Stilson and Brandon Hoffman as they were sworn into office, pledging their dedication to serving on the council.

Also during the ceremony, Janet Tuttle was thanked for her service as she left office. Mayor Roger Swenson shook Tuttle’s hand, expressing his appreciation for the time she dedicated to the council, the city and Orangeville residents. 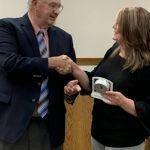 Mayor Roger Swenson thanks Janet Tuttle for her service. 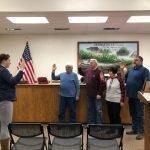 The council members take the oath of office.