An accident involving a semi truck and a passenger vehicle resulted in extrication and medical transport of three people on Wednesday morning.

According to Sgt. Chris Parkins from the Utah Highway Patrol, the incident occurred around 8:40 a.m. near Emery Town, mile post 8, on Highway 10. Parkins said the incident occurred when the driver of the semi truck attempted to make a right hand turn and struck a passenger vehicle in the neighboring lane. The vehicle was pushed off the roadway and rolled onto its side into a ditch.

The Utah Highway Patrol along with the Emery County Sheriff’s Office responded to the scene, where it was determined that the three passengers in the vehicle, including a 76-year-old driver, would need to be extricated. Crews were able to extricate the three passengers and prepare them for medical transport for injuries that were deemed not life threatening.

According to Parkins, the driver of the semi truck was cited as a result of the accident. The names of those involved in the incident have not been released. 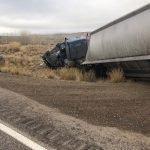