The Emery County Business Chamber hosted its Lunch and Learn at the fairgrounds park in Castle Dale on Wednesday. At the event, Pat Behling of Pat’s Sew N Stuff was awarded the July Business Spotlight for her 26 years of business in Ferron.

Neal Peacock of Peacock Training LLC was the guest speaker during the luncheon. The topic of his speech was “Accidental Leadership: The leadership lessons I learned from serving as mayor of Castle Dale for 12 years.”

After serving as the mayor of Castle Dale, Peacock started his own business to help people in a wide variety of subjects via speeches, discussions, workshops and trainings.

Peacock’s speech took chamber members on a journey back to a time when he needed help to prepare himself to be mayor. It was only a couple of months after 9/11 and as a new mayor, he was at a loss. He began to look at history to help him prepare to be a better leader and discovered Cyril Richard “Rick” Rescorla.

Rescorla was a retired United States Army officer, born in Britain, who served the United States as a soldier in the Vietnam War, where he was a second lieutenant. He later became the director of security for the financial services firm Morgan Stanley at the World Trade Center’s South Tower. Rescorla had anticipated the attacks on the towers and enlisted the help of his military friend, Dan Hill. Together, they implemented fire drills and evacuation procedures that saved many lives. Rescorla lost his life that day.

After researching and learning about the courageous life of Rescorla, Peacock knew that with vision, caring and a willingness to work, he too could be a success.

To find more information on Peacock’s workshops, go to www.peacockspeaks.com.

Next month’s Emery County Business Chamber Lunch and Learn will be September 17 at the Museum of the San Rafael. 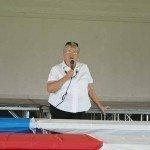 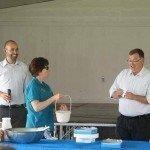