Wonders of the Swell contest winner Tyson Chappell (left) was honored during Saturday’s event. He stands with his agent, Shalee Johansen.

After months of gathering submissions, narrowing the competition field and opening votes to the public, the Wonders of the Swell competition culminated on Saturday as the winners were announced at a ceremony in Green River.

Submissions for the contest were accepted beginning in April with a firm deadline of May 31. From there, the field was narrowed down to the top photos in three categories, including professional, amateur and youth. Along with online voting for the people’s choice award, experienced photographer Bob Maynard served as the judge for the contest. The top finishers were announced during a ceremony for the photographers, along with their friends and family, and the community.

Chappell’s photo entitled “Swell’s Gate” was selected as best in show and will be featured in an upcoming advertisement in the National Geographic Travel magazine in the coming few months.

“I’m very happy, humbled, and amazed to announce that I was fortunate and lucky enough to be the first and second place winner for the professional landscape division of The Swell photo contest,” Chappell said. “Due to the many incredible images entered by others, I was sincerely unsure about my chances with this contest. Clearly, I am so elated with these results.”

“I am so very excited to spend so much more time under these incredible skies of Utah and surrounding areas,” said Chappell.

Other winners of the Wonders of the Swell are Ethan Shipley and Gary Clendening, who will both be featured alongside Chappell in the National Geographic Traveler Magazine. Categories consisted of professional and amateur as well as people’s choice, youth and best local photographer. The categories have more than two winners in each category for first and second place as well as an honorable mention.

The full list of winners, as well as their photographs, can be viewed by clicking here. 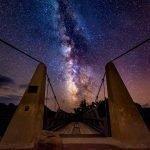 “Over the Swinging Bridge” by Tyson Chappell 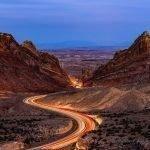