A synchronized trampoline competition kicked the event off. The teams of Lainee Vasquez and Ayden Nielsen, Granger West and Derek White, Shelby White and Gracie Salas and Rakayla Rich and Kaytlen Lopan all placed first in this event.

A back handspring contest was also conducted at the meet. Rakayla Rich finished in first place with 43 back handsprings in a row. Jordayn Oman followed with 41 handsprings, Kaytlen Lopan with 26, Shianne Cooper and Canessa Montoya each had 19 and Jade Vea finished with 11. 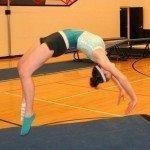 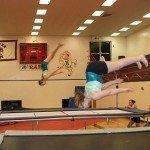