Shortly after, Rakayla Rich traveled to Farmington to compete at a USA Gymnastics meet. She placed second on power tumbling and third on the double mini trampoline. Rich is coached by Pineau Nielsen. 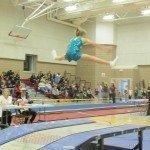