On August 5, Captain Kyle Ekker observed a chemical tanker that had been left in the parking lot south of the Village Inn Motel in Huntington. The landing gear had sunken into the ground, causing the tanker to tip down in the front. The placard on the tanker indicated a hazardous material onboard, but it did not appear that there was any leakage.

The truck driver arrived on scene and advised Captain Ekker that he had dropped the tanker at this location before making another delivery with a pup trailer. The driver advised that the tanker was fine when he left it. Captain Ekker requested members of the HazMat Team respond to be on standby in case the tanker was compromised as it was being lifted.

HazMat Team members responding to the incident were Sgt. Tom Harrison, Detective John Barnett and Deputy AJ O’Neil. The incident was turned over to Sgt. Harrison, who directed the recovery effort. Deputy O’Neil used the numbers on the placard to do a computer search and quickly identify the contents as Sodium Hypochlorite. The tanker contained 48,000 lbs of this chemical, which when dissolved in water is commonly known as bleach. The MSDS sheets and the protective distance map were obtained in case the tanker became damaged and started leaking.

Arrangements were made with Nielson Construction to respond with a crane to lift the tanker up so it could be hooked to the tractor. Detective Barnett documented the incident and assumed the role of Safety Officer during the lift. The crane operator and an advisor from the chemical company discussed by phone the strongest points on the tanker to rig the crane straps and make the lift without causing damage to the tanker. The tanker was lifted and hooked to the tractor without incident.

The tanker was thoroughly inspected before being allowed back on the roadway. The right fender and the ladder were damaged, but the tanker body was structurally sound with no leakage. Captain Ekker stated that he was very pleased with the way the HazMat team members came together and used their skills to avert what could have been a bad situation. 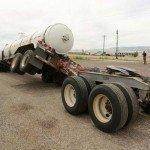 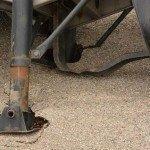 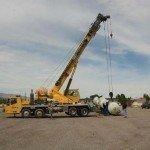 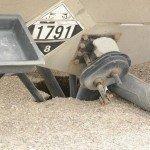 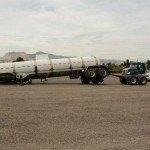 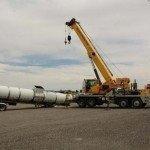 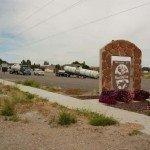 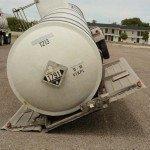 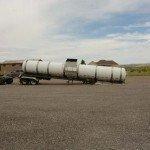 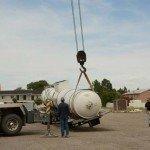